Have You Been Arrested for or Charged with a DUI?

A charge of driving under the influence or DUI can happen to anyone. In fact, California had 180,212 DUI arrests in 2011, according to the 2013 annual report to the California State Legislature. Use of prescription antidepressants, painkillers, over the counter antihistamines and decongestants, as well as alcohol, can lead to DUI arrest. If you have been arrested for DUI, it does not mean that you are guilty. It is important to fight against DUI charges, as even a first conviction can result in harsh penalties and stay on your record, negatively impacting your future, including your ability to travel outside the United States.

Contact Andrade Law Offices today at (805) 962.4944 to set up a free case evaluation with our Santa Barbara DUI defense lawyers.

Steven R. Andrade is the foremost expert in DUI defense in California. He has successfully defended thousands of DUI cases in Santa Barbara and surrounding counties. After you are arrested, you are required by California law to take a breath test or blood alcohol test. If you refuse to cooperate, your driver's license WILL BE SUSPENDED.

After you are arrested for DUI, you have 10 days from the date of arrest to request a DMV hearing. Do not ignore this opportunity to obtain a stay of a suspension. Once you request the DMV hearing, you may keep driving until you are granted a hearing and a decision has been made whether to suspend your license for a specific period of time, or permanently stay the suspension.

If you have just finished drinking, your alcohol level should be rising. Ask for the voluntary breath test right away. This may result in a lower reading.

If you stopped drinking more than 90 minutes before police contact, your alcohol level should be dropping. Do not submit to the voluntary breath test offered before the arrest. As time passes, your blood alcohol level will drop.

Seek guidance from an experienced DUI defense lawyer on your side as quickly as feasible after your DUI arrest. Your lawyer will likely seek a DMV hearing to have any driver's license suspension stayed.

Things You Need to Know About DUI in California

At Andrade Law Offices, we believe our clients should be well informed about DUI for their own protection. For instance, should you agree to take a breath-alcohol test after a traffic stop? To know more about DUI defense in the state of California, consider owning a copy of Steven's book, “Strategies for Defending DUI Cases in California.” The more you know about impaired driving, the better prepared you can be to avoid these serious charges.

After a DUI arrest, it is vital that you contact an experienced DUI defense lawyer to represent you. Steven, the founding attorney of Andrade Law Offices, is recognized as one of the premier DUI defense attorneys in Southern California.  He has successfully defended thousands of DUI cases in Santa Barbara, Ventura, Los Angeles, Ventura, and San Luis Obispo counties.

Steven is a former prosecutor and former Assistant Attorney General. He is a fearless advocate who is tough on prosecutors and aggressively defends his clients. He is recognized as one of the National Trial Lawyers Top 100 Trial Lawyers.

Consequences of a DUI Conviction

Even for your first DUI offense, you could face license suspension, jail time, fines, a DUI program, ignition interlock device installation, a license reissue fee, and a requirement of SR-22 filing. This filing is a certificate of financial responsibility for high-risk drivers provided by insurance companies to the DMV. Penalties for conviction of second and subsequent offenses become increasingly harsher.

In addition to the criminal penalties you face, a DUI conviction could stay on your record permanently and damage your future employment, education, housing, travel, and even personal relationship prospects. It makes sense to do everything possible to avoid a conviction.

You will want us on your side to fight your DUI charges. Do not fight them alone. We offer free representation at DMV hearings for all DUI clients and are available 24/7 to take your call.

Act now by calling our office at (805) 962.4944 for a free consultation. Our seasoned Santa Barbara DUI defense attorney is here to fight aggressively for your rights and your freedom. 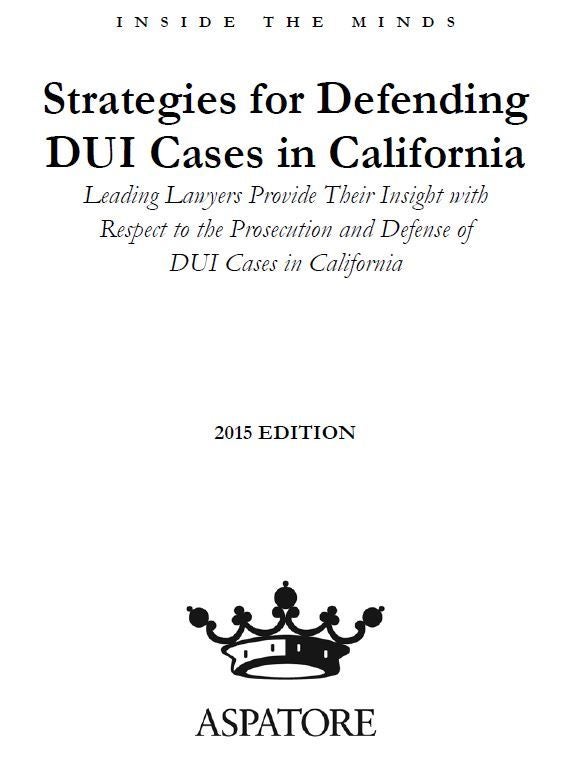