The Hard Facts about Impaired Driving: Who is Most at Risk? 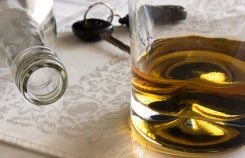 College students have been the topic of endless alarming media reports about binge drinking, but what do the actual facts reveal? The Centers for Disease Control (CDC) reports that binge drinking is the most common pattern of excessive alcohol consumption in the USA and it is often assumed that young people are the most likely to engage in episodes of heavy drinking. In fact, binge drinking is a habit among people of all ages.

What is Binge Drinking?

Binge drinking is generally defined as any drinking behavior that leads to a blood alcohol concentration (BAC) of .08 percent or higher. Although weight, age, and gender affect how quickly alcohol is absorbed into the blood, binge drinking is typically when men consume five or more drinks and when women consume four or more drinks within a two -hour period. The CDC also reports that the majority of people who binge drink are not alcoholics.

There are serious health risks associated with heavy drinking, including vehicle accidents, alcohol poisoning, an increased potential for acts of domestic violence, and dangers to the fetus when pregnant mothers consume alcoholic drinks. Continued binge drinking can lead to liver disease and other permanent or fatal medical conditions.

The Stats on Binge Drinking

The agency reports that one in six adults in the USA binge drinks approximately four times per month and the average consumption is about eight drinks in each “binge drinking” session. Binge drinkers come in all ages.

Although incidents of “binge drinking” are more common in young adults between 18 and 34 years of age, a high percentage of binge drinkers are 65 years or older. The latter, age group is reported to engage in heavy drinking about five to six times per month.

The agency also reports on the demographics of binge drinkers. Those who meet the definition of binge drinkers are among the more affluent in the society, with an income level of $75,000 or more; lower income people are much less likely to engage in these episodes of consuming many drinks within a few hours.

Although college students, who have now reached drinking age in many cases, are known to binge drink at parties and get-togethers, 70 percent of episodes of binge drinking involve people who are beyond college age, at 26 years or older. The focus on college students as binge drinkers often has led to a false impression not supported by the facts.

The UCSB police have been given the task of reducing the numbers of drunk drivers and DUI checkpoints are fairly common. A recent checkpoint led to 572 vehicles being screened, with ten DUI arrests. Nine of the ten people arrested were not associated with USCB, however.

Are you a college student that has been arrested and charged with DUI? Our firm offers discounts for first-time charges filed against UCSB students.

Every person facing DUI charges has the right to plead “not guilty” and be defended by a DUI attorney. Don't assume that because you were arrested, you are guilty and must just face the penalties. There are many cases in which testing was improperly conducted, cases involving faulty breath testing units, incorrect arrest procedures, and other failures that make it possible to have the charges dismissed. No matter what happened to you, connect with our firm. You may have been on an innocent “girls night out,” out for dinner with friends, or just enjoying a few drinks.

Our firm has successfully defended thousands of people facing DUI charges. Take advantage of our legal skills, know-how, and determination to assist you to fight to avoid conviction. Call the Andrade Law Offices today.